In the ten-year wake of the 2008 financial crisis, American families in the market for a new manufactured home have been hard-pressed to obtain financing from smaller banks and lenders. However, hope for relief from the regulations that created this predicament is now on the horizon—the Associated Press reports that the Senate is poised to pass bipartisan legislation that would roll back some key aspects of the Dodd-Frank law. This financial deregulation bill may be voted on as early as next week.

The Dodd-Frank Wall Street Reform and Consumer Protection Act was passed in reaction to the 2008 financial and foreclosure crisis, which was triggered largely by banks that bundled high-risk mortgages and sold them into the securities market.

Manufactured homes did not, and still do not, have access to a secondary financing market (Fannie Mae, Freddie Mac, et al). As such, they were not supposed to be subject to mortgage provisions of Dodd-Frank. According to now retired congressman Barney Frank—the bill’s originator—their inclusion was both inadvertent and unintended. 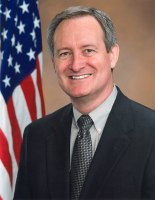 The Economic Growth, Regulatory Relief and Consumer Protection Act (S. 2155) is touted as lightening the Dodd-Frank Act’s requirements of smaller banks and Credit Unions. These lenders characterize those requirements as a significant hindrance to their ability to conduct business and make loans.

Senate Bill 2155 emerged from lengthy negotiations between Mike Crapo, R-ID, the Republican chairman of the Senate Committee on Banking, Housing and Urban Affairs, and Democratic members of the committee.

Many Democrats are on board, and the bill has 13 Republican and 13 Democratic co-sponsors, a rare level of bi-partisanship for substantive legislation in the current Congress.

At a town hall meeting in Virginia, Sen. Mark R. Warner, D-VA, co-sponsor of the bill, shed some light on how it would help lenders do business more easily. 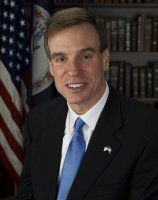 He said the legislation would relieve some documentation requirements, but keep in place “periodic” stress tests for midsize and larger banks. The annual stress tests are intended to ensure that institutions have enough capital to withstand major losses like those sustained 10 years ago during the mortgage and foreclosure crisis. The frequency of the tests would be left to regulators.

“We’re not going to let you be irrational—I would say ‘stupid’—as a community bank,” Warner said. “But we’re going to give you a little more flexibility if you’re willing to keep the loan on your books. If you plan to sell it, we’re still going to require you to cross your T’s.”

The legislation increases the threshold at which banks are considered critical to the system from $50 billion to $250 billion. The legislation would ease regulations on more than two dozen financial institutions. It is conceivable that some of those lenders exempted will enter or reenter the manufactured home financing sector.

Legislation Would Leave the CFPB Intact 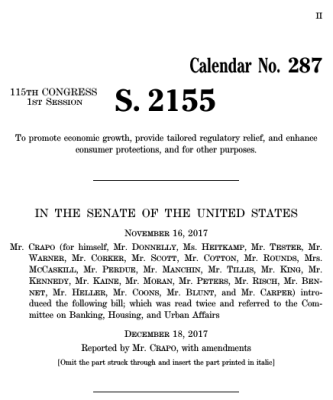 The Dodd-Frank Act created the Consumer Financial Protection Bureau (CFPB) and imposed significant reporting and capital requirements on financial institutions—even those that were relatively small. The actions and posturing against manufactured home sales and financing by the Bureau’s former Director, Richard Cordray—who has recently resigned—have been discouraging to millions of Americans pursuing their dream of homeownership via an affordable, quality manufactured home.

In an interview, Warner said the Senate version of the bill leaves the CFPB untouched, calling the consumer agency “really important”. He promised to rescind his support if the version advanced by the House targets the agency or appends other hot-button issues to the legislation.

While the bill has bipartisan support, as well as the support of the banking industry, it also has its critics. They include Sen. Elizabeth Warren, D-MA, who helped create the CFPB.

This legislation is certainly not a “cure-all” for manufactured home builders, retailers, and lenders, nor for the homebuyers they serve. However, there is legislation pending that has the potential to “make right” the obstacles that have prevented low- to middle-income, hardworking citizens from achieving homeownership for what has now been almost a decade.