How have politicians and institutions systematically profited from the stigmas attached to prefabricated housing?

Politicians and institutions of every persuasion have long looked upon the mobile home and manufactured home owners as a source of easy revenue for pet projects to curry favor with their electorate. They often assume, incorrectly, that those who live in these “substandard”  homes are easy prey and will not defend incursions by those who represent “real home” constituents.

We have chronicled many of the egregious attempts by state and local government to increase taxes, fees, and assessments as they relate to mobile homes. Within the last few years, the manufactured housing industry has actively intervened and succeeded in thwarting legislation and rulings by elected officials that were without merit.

This prejudice and degradation also extends to lenders, appraisers and insurance companies. The following examples illustrate the unfortunate situation is improving in some sectors, but is still a long way from being fair and equitable. 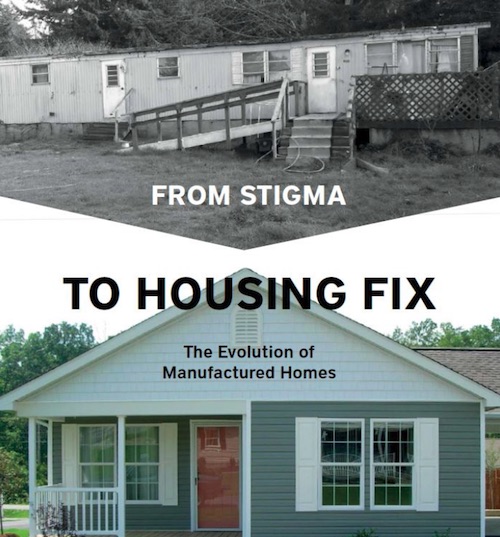 A manufactured home placed on property not owned by the home buyer are always subject to substantially higher interest rates and shorter maturities than traditional site built homes. It is certainly reasonable that financing manufactured home not attached to real estate would be subject to higher financing charges. But not three or four times the rate charged for a traditional home.

What is not reasonable is when a manufactured home or a modular home is permanently attached to land and titled as real estate most lenders will charge the borrower a higher rate than a site built home, even though the manufactured home is built as well as a comparable site built and is indistinguishable from the site built.

It is also common practice that home appraisers will automatically lower the value of the home if determined the home is a factory built home.The lenders use this as justification to discriminate against manufactured home borrowers.

Manufactured home owner insurance based upon mystical risks, not facts

Recently, Trinidad Navarro became the newly elected commissioner of the Delaware Department of Insurance. One of the reasons Navarro had for pursuing the office was that some have accused the department of being “too close” to insurance companies he said.

According to a report by Delaware Business Times, “Navarro said he sent back thousands of insurance companies’ campaign contributions,” announcing he “wanted to change that perception.”

Navarro started with scrutinizing requests from insurance rate hikes. Navarro explained he gets about 25 or more of these requests to review each week.

“One insurer requested a substantial increase on manufactured homes in coastal Sussex County. Navarro demanded the rationale. “Was there a tornado? Was there a volcanic eruption or tsunami that I was not aware of?” he asked the company’s representative, who reviewed the data and stated it was due to “reinsurance costs.” (Reinsurance refers to the practice of insurers transferring portions of risk portfolios to other parties to reduce the need to pay a large obligation from insurance claims.)”

Following the request, the department hired an independent actuary, who found the area in question had a low claims history. The company agreed to cut the rate increase in half.