Amarillo, Texas, like other municipalities across the country, suffers a seriously diminished inventory of affordable housing.

As a direct result, increasingly more of Amarillo’s residents are choosing to purchase a new manufactured home, or are investing in the repair of their existing older mobile homes.

In a recent report by Amarillo Globe News, the City of Amarillo has granted permits to developers to construct or renovate 104 manufactured homes last year – the first time more than 50 have been issued in this decade – which will add to the greater Amarillo’s established wealth of manufactured home/mobile home housing.

Amarillo Housing By The Numbers 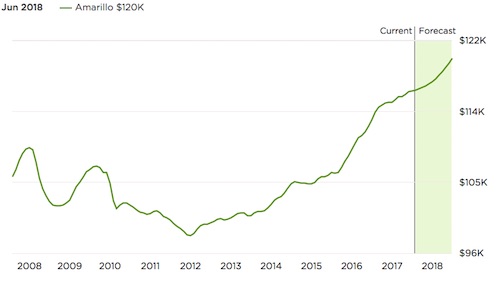 Real property appraised values are considerably higher than the personal property units (about $78,600 in Potter County and $75,000 in Randall County, due to a lack of rental and utility costs).

Most manufactured homes are placed either north or south of the Amarillo city limits. City zoning requirements inhibit the ability for placement in established residential neighborhoods.

The appraisal sounds about right according to Tammy Deterts, who lives in a new manufactured home on her nearly one-acre parcel of land north of the City of Amarillo with her son, daughter-in-law, and grandson.

Deterts picked out nearly everything on the interior of her 16-by-80-foot home, including the flooring, drapes, and carpet – all of which would have been unaffordable in a built-to-suit site built home. She gets her own water from a well out back and set up her own plumbing.

“When we want to crank up our music, we can,” she said. “If we want to have a big get-together with family, we’ve got the space to do that. In apartments, you don’t get that.”

“You can get a lot more house for the same amount of money,” Hunt said.”And with a lot of them today, it’s hard to distinguish the inside from any other house. We’re talking about a lot more affordable housing, which is a big issue in the state now.”

“In our industry, the biggest problem we have is that when people think of a mobile home, they think of their great-grandma’s trailer,” said Texas Manufactured Housing Association Executive Director DJ Pendleton. “People hear ‘mobile home’ automatically go to the worst image in their brain. Really, it’s an incredibly regulated product that has to go through federal building codes as well as state and local regulations.”