Kid Rock, the singer whose career has spanned rap, hard rock, and country music, has recently finished writing a country song titled “Tennessee Mountain Top” at his own Tennessee mountain top home, where he proudly resides in a “camouflaged” double section manufactured home. Lyrics include:

With a preacher man prayin’ for peace but still packin’ a gun… Singing karaoke in a double wide… With smoke so thick it’ll burn your eyes.”

Kid Rock, whose legal name is Robert James Ritchie, was host to a recent gathering on the back deck of his Tennessee mountain top manufactured home, with views that stretch 15 miles to the Nashville skyline.

Between bites of food, Kid Rock said he stumbled on the property by accident. His car could only make it part of the way up the narrow, winding road, so he parked and walked to the top. When he saw the view, Kid Rock said, he knew he had to have it. As for the manufactured home—that decision was born of impatience.

In an interview with the Tennessean, the singer said he had plans to build a cabin on property he owns in Alabama. However, he wanted it sooner than contractors could build it. He drove by a manufactured home retailer and stopped in to check out their homes. 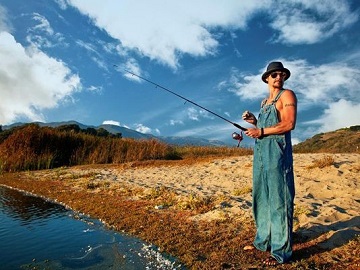 “I didn’t remember when the last time I looked at a trailer was,” Kid Rock said. “I kind of scared this lady and her husband and I said, ‘What’s your most expensive trailer?’ I was a little impatient that day. She said, ‘Sir, that’s $89,000.’ I was standing there like, ‘Can I look at it? And she looked at her husband and I was like, ‘Are you guys actually thinking about it? You might not let me see it?”

Kid Rock joked he was starting to get irate, explaining, “we singers have got pretty good egos.”

The couple showed him the manufactured home on display, and when he found out the manufacturer could make any changes he wanted to its design—including reinforcing a wall and leaving the exterior unpainted so he could get a 3M vinyl wrap in Mossy Oak—he was sold. Kid Rock ordered two manufactured homes on the spot—one for his Tennessee mountain top property, and another for his land in Alabama.

“Now she was just baffled and confused,” he recalled of the business owner. “I said, ‘I’ll leave you a $20,000 deposit for two of them.’ I thought her head was going to explode.”

Kid Rock Says He Plans To Run For U.S. Senate as a Conservative Republican in Michigan 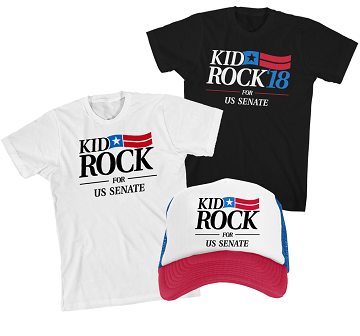 In July, Kid Rock fueled speculation that he intends to announce a bid for the U.S. Senate next year. Many conjecture that this may be merely a publicity stunt. However, he has since given some credence to his intentions. He has taken procedural steps to place himself on his home state Michigan’s ballot to challenge incumbent Democrat Debbie Stabenow.

The post continued, “Senator Stabenow and I do share a love of music, although probably not the same kind. I concede she is better at playing politics than I am so I’ll keep doing what I do best, which is being a voice for taxpaying, hardworking AMERICANS…”