It’s January 30, 2017, and those are your coast-to-coast manufactured housing headlines for the past week. As the new work week begins, let’s inspect some of those recent headlines.

The huge success and enthusiasm of the Louisville Show exhibitors and attendees were not diminished whatsoever by the attention and hoopla surrounding the concurrent Donald Trump Presidential Inauguration. In fac,t the manufactured housing industry was buoyed by President Trump’s campaign intention to address economic factors and regulation overreach that has heretofore stymied affordable quality homeownership for millions of hard working lower and middle-income families seeking that American dream.

was a clear indication that today’s modern manufactured homes and modular homes match the criteria of “everything a home should be” and will have a cost up to 50% less than a comparable well built traditional home.

“We had 1,933 people representing 753 companies in these four categories. If you add in the additional representatives in these categories, it comes to 346 more people in 2017 than came in 2016. This is a significant increase from one year to the next. In addition, if you add in the exhibitors and special guests, our total number comes to 2,929 individuals representing 962 companies. I think everybody would agree that this year’s Louisville Manufactured Housing show was a success. The degree of enthusiasm was most rewarding. We are looking forward to the 2018 show.”

This was an industry only show, however, ManufacturedHomes.co (MFH) was once again a participant exhibitor and have utilized our production facilities to record 3D virtual tours and videos of the home displays, innovations, interviews and information from the Louisville Show. Home shoppers are invited to check back her at ManufacturedHomes.com/blog  over the next few days and weeks to see for yourself what the excitement is all about.

MFH once again extends congratulations for a great show to Dennis Hill, show coordinator and Trisha Ragoopath, Administrative Assistant, of Show Ways Unlimited, as well as the sponsor, The Midwest Manufactured Housing Federation. 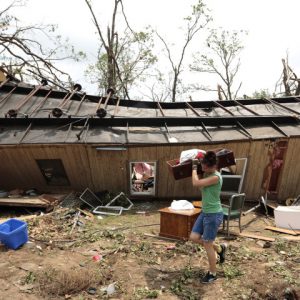 Ten of at least 20 people killed in last weekend’s tornado outbreak lived in Georgia mobile home parks, yet laws requiring storm shelters in those vulnerable communities are few and far in between, according to a report by ABC News and the Associated Press.

Another report by AJC.com offers this: “We tell people that are in mobile homes or trailers to find somewhere else to be because those are the worst places you could possibly be,” said David Nadler, a National Weather Service meteorologist based in Peachtree City, GA.

Reports like these are typical, fairly accurate and heartbreaking following a weather event in tornado-prone areas like the south, midwest, and southeast. All areas where there is an extra large population of older pre-Hud (built prior to 1976) mobile homes. In fact, according to U.S. Census Bureau, there are nearly 400,000 older mobile homes in the state of Georgia, ranking fifth nationally.

The fact is there have been no mobile homes built since 1976! Forty years ago the U.S. Congress passed the National Construction and Safety Standards Act, a national manufactured home building standards code enforced by the U.S Department of Housing and Urban Development. The (HUD Code). The HUD Code is a stringent building code regulating every aspect the construction and installation process of the legally named manufactured home.

The HUD code was additionally strengthened in 1994 requiring manufactured homes to be engineered for wind safety based on the geographic regions in which they are sold. As a result of these requirements manufactured homes produced since 1994 have been proven to be equal, and in many respects safer than site built homes during tornadoes and hurricanes. (It is important to note that there are not any homes built to withstand winds of 200+ miles per hour).

The “mobile home” of the past and the manufactured home of today have little in common when it comes to wind and storm safety. The advancements in building technology and federal regulations, specific only to manufactured homes, have contributed to a well-documented wind safety record.

The Manufactured Housing industry (MHI), the national trade association for the factory-built housing industry has been working to clear up long held negative stereotypes about manufactured homes that have persisted since the mobile home era of four decades ago.

“The standards for manufactured housing are subject to robust compliance and quality and assurance regulations,sometimes more stringent than those for traditional site-built homes,” says Richard Jennison, President and CEO of MHI. “The building materials in today’s manufactured homes are the same as those used in site-built homes. The homes are engineered for wind safety based on the geographic region in which they are sold.”

MHI also urges to be safe during a storm and to seek proper shelter or if there is no designated storm shelter available, seek shelter in a large sturdy building such as a church or perhaps even a close by Walmart. Jennison added, “A tornado and hurricane deadly force does not selectively discriminate between a site built, a manufactured home or any other structure.”

For more information and studies about manufactured home wind safety research, you are invited to review our blog titled, “Manufactured Homes Are As Safe As Traditional Homes During a Storm.”

On the surface, it would appear that everyone would be on board with this legislation. After all, who would not support a tax break for veterans. It was assumed that no one would object to increasing the sales tax on manufactured homes to help our American heroes. Conventional wisdom? Not so fast!

The proposed tax bill to exempt military retirement benefits from state income taxes with offset revenues derived from tax increases on manufactured housing was spearheaded by Arkansas Senate Republican leader Jim Hendren of Sulphur Springs. It should be noted that Hendren is a colonel in the Missouri National Guard and the nephew of Governor Hutchinson, who has announced intentions to seek re-election in 2018.

Senator Hendren urged veterans across Arkansas to call their lawmakers in support of Gov. Hutchinson’s proposal to exempt military retirement benefits from state income taxes. Hendren was adamant that the tax increase on manufactured housing would remain within the Governor’s tax measure.

In the previous MFH report, it appeared that this measure would easily make the final cut as it was assumed that no one would even notice or care about the manufactured home tax increase. Those assumptions were misplaced. Someone was paying attention and did care about the tax increase to be assessed upon purchasers of the only affordable quality housing available in the state of Arkansas. That someone, was J.D. Harper, Executive Director of the 105 members of the Arkansas Manufactured Housing Association,(AMHA).

Harper said in an interview that the proposal would increase the average cost of a new manufactured home by about $ 1,800 in cash based on an average purchase price of $65,000. “If they finance over the life of the loan, it’s about $3,500, so we are not talking about a nickel or two,” Harper said.

“I understand it is being tied to the veteran’s tax cut. We are not anti-veteran in any way. We just think there is a better place to find funds,” Harper said at the state capital. “We are trying to make sure that people understand that this is an increase on working people. People who buy a house from us generally make around $46,000 a year in median household income. We are already the highest [taxed[ in the region.”

MFH is pleased to report the following recent updated from Arkansas News recapping the ongoing status of the Arkansas Governor’s tax cut measures pending in the state legislature:

Hendren said Friday the measures likely will be amended to remove the provision regarding manufactured housing which has met with resistance from many legislators. The provision may be replaced with a repeal of a sales tax exemption on digital downloads of books, movies, and music, he said.

We commend J.D. Harper and members of A.M.H.A for once again illustrating that the state of Arkansas is one of the most active and most effective state manufactured home associations in the nation, confirming that:

“All politics are local” first coined by former Speaker of House Tip O’Neill in his first political campaign in 1935.

Find a qualified manufactured home lender near you today