It’s Saturday morning and Hurricane Harvey has landed. Making landfall Friday evening on the Gulf Coast of the great state of Texas, the extent of the damage is yet to be known.

But if all dire predictions are true, this Category 3 or 4 hurricane will wreak devastation to the homes and livelihoods in the path of this menacing storm.

We pray the citizens who call this beautiful area “home,” have heeded the countless warnings issued over forty-eight hours ago, asking all to vacate all low-lying and coastal areas near Corpus Christi and Galveston Bay.

When we think of a hurricane there is usually a vision of devastating winds and rain. As Hurricane Harvey, with Category 4 force winds, bears down on the Texas Gulf Coast there is expected to be a catastrophic “storm surge,” posing a risk to over 230,000 homes, including mobile homes and manufactured homes, in the storm region, according to analysis by Core Logic that measures exposure to damage from “storm surge.”

What is a storm surge?

According to the National Hurricane Center, a storm surge is a formidable change in sea level that pushes monstrous amounts of water onto the shore.

Citizens along the coast of Texas are being advised to brace themselves as sea levels are expected to surge up to 12 feet (3.7 meters) high. In that scenario, it only takes a one-foot-deep surge to sweep cars and people off their feet, and anything bigger than that could decimate trees and buildings in its path.

Statewide cost to rebuild and/or replace homes, mobile homes and manufactured could be near $40 billion

More than 118,000 homes in the Houston area alone are potentially at risk of storm surge according to the Core Logic analysis reported by the Houston Chronicle.  The cost to rebuild and/or replace homes, mobile homes and manufactured homes, could top $20 billion. 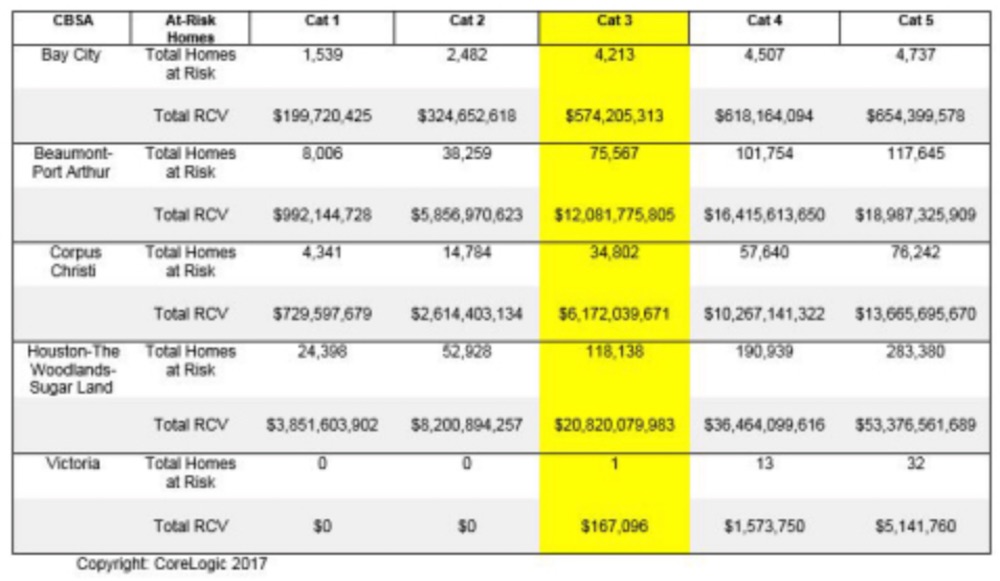 The Federal Emergency Management Agency (FEMA) is an agency within the Department of Homeland Security charged with providing services to assist victims of declared natural disasters, primarily providing temporary housing for those families.

John Kelly, who most recently joined Trump’s White House as Chief of Staff, was Secretary of the Department of Homeland Security (DHS) until recently. In Kelly’s short tenure at DHS, he systematically revamped the regulatory boondoggle that had created the ineffective response by its agency, FEMA. Thereby facilitating a greater response time and more effectual recovery efforts for the citizens of Texas following this monumental natural disaster.

Hold tight Texas, this is going to be a long and costly weekend along the Gulf Coast.