Dana Zuckerman didn’t know what to expect when she listed for sale four small factory-built modular homes she’d installed on a one-third acre lot in the Collister neighborhood of Boise, Idaho – set among one-and-two story duplexes and traditional homes three miles west of Capitol, Dana was presently surprised at the interest and activity, reports the Idaho Statesman online.

The homes were much smaller than most houses. Three had less than 600 square feet, with one bedroom and one bath, with the fourth at 719 square feet with two bedrooms.

The modular homes manufactured by Kit HomeBuilders West in their Caldwell, Idaho building facility each have an integrated covered wood front porch at entry that adds style and street appeal to the exterior elevations of the homes. These small homes boast big home features that don’t skimp on amenities or quality. Parking is to the rear of each home. 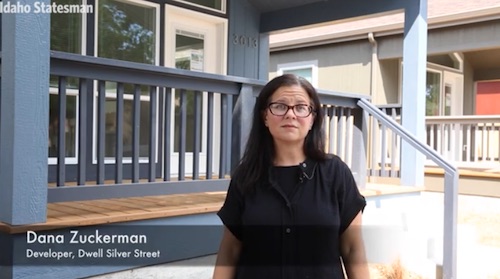 “It was really an experiment,” said Zuckerman, a first-time developer who previously worked as an urban and land use planner in Chicago and New York and serves on the board of the Capital City Development Corp., Boise’s urban-renewal agency. “I wanted to see if Boise was ready for smaller homes in an area close to other amenities.”

Which means Zuckerman’s experiment worked. It offers not only a lesson for developers and Boise officials, but also for individuals, developers and housing authorities in other urban areas where quality affordable housing needs can be addressed by manufactured housing.

Listed for between $145,000 and $165,000, the homes were listed less than a month ago on a Friday. By Monday, after the weekend open house, multiple offers had come in on all four homes. One has since closed with the three others in the closing process.

More than 100 people contacted Zuckerman and the listing agent while the homes were under construction. An investor offered to buy all four, but Zuckerman wanted them to go to people who needed affordable homes and would live in them. Two of the buyers are retirees and two are millennials.

Low-cost homes are increasingly rare in Ada County. Through June 30, the median price in Northwest Boise, were these modular homes are sited, was $275.000 — nearly five times the Ada County median income of $56,346. Ninety new homes sold for a median price of $389,000 last year according to the Intermountain Multiple Listing Service.

“We knew there was a need for affordable housing in Boise,” said Alicia Ralston, broker with Ralston Group Properties, which marketed the homes for Zuckerman. “We were still surprised by the number of people who came to the open house, received phone calls from and received offers from.”

Kit HomeBuilders West (Kit) of Caldwell, is one of the oldest and most respected builders of high quality, value-oriented manufactured homes and modular homes offered for sale by a large network of authorized retailers throughout the region. The authorized retailer in the local Boise area is United Family Homes Of Nampa.

Homes produced by Kit include over 85 customizable floor plans and designs available from 500 sq.ft to over 3,000 sq.ft. with amenities and construction standards equal or superior in every respect to comparable site-built homes, and will cost the homebuyer a lot less.

“There Will Be More,” Small Modular Home Developments

Kit Homebuilders West are built to the national manufactured home HUD Code either/or to the specific requirements for modulars imposed for traditional site-built housing, as was the case for the homes sited in Boise.

Leon Letson, a Boise city planner who handled Zuckerman’s planning application, is unsure how many modular homes have been placed within Boise.

Zuckerman said she wants to provide more affordable modular homes. “There will be more, she said.

Letson said buyers will want them. “As everyone who owns a home or is trying to buy a home or trying to rent a house is aware, there is a real demand for housing in the Treasure Valley and Boise, in particular,” he said. “Projects like this would probably be a good answer moving forward in how we provide for people.”